When I retired in 2008, I made self-care one of my priorities. My life needed a major overhaul in this area, and now I had the time and space to make the necessary changes. While I had abandoned several practices that didn’t contribute to my well-being, I needed to add more positive strategies to my regimen.

I followed my usual modus operandi and started reading blog posts, newspaper and magazine articles, and books about self-care. Suddenly, I was encountering the word everywhere—online and offline.

At an executive meeting of my Toastmaster club, a female member stood and announced. “In the interest of self-care, I have decided to resign my position as secretary.” No one blinked or raised an eyebrow. The club president acknowledged her contributions and moved on to the next item on the agenda. It was that easy, something I didn’t realize until the fifty-fourth year of my life.

In my readings, I discovered many ideas and suggestions, some practical while others were way out in left field. At times, I was overwhelmed by the onslaught of literature devoted to helping me feel calm and content. With so many options competing for my time and attention, I knew I had to find an approach (or two) that wouldn’t feel like a chore or cost boatloads of money.

One of the first books that that resonated with me was Live a Little: Breaking the Rules Won’t Break Your Health by Doctor Susan Love and Alice Domar.

I found it refreshing to learn that Doctor Love didn’t start a fitness program until age 50. She had no regrets about this late start; she spent her younger days doing research, working with breast cancer patients, writing books, and raising a family.

A psychologist with expertise in stress and women’s health, Ms. Domar openly admits some of her foibles. She writes about feeling tired and unappreciated after delivering a talk on self-nurturance.

The authors take on the health police (TV experts, magazine writers, trainers, well-meaning friends and neighbours) and provide us with a realistic view of what’s healthy and what is mostly hype. In short, they show us how to be healthy without driving ourselves crazy.

They recommend we trade in the illusion of becoming perfectly healthy for something more fun and doable: being pretty healthy. How reassuring to read that self-care doesn’t require large outlays of money and time. All I had to do was find something—anything—that made me feel
better about myself and make it part of my routine. Effective self-care is all about developing positive habits.

This was the starting point of my wellness journey. 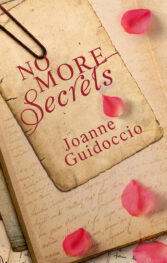 Angelica Delfino takes a special interest in the lives of her three nieces, whom she affectionately calls the daughters of her heart. Sensing that each woman is harboring a troubling, possibly even toxic secret, Angelica decides to share her secrets—secrets she had planned to take to the grave.

Spellbound, the nieces listen as Angelica travels back six decades to reveal an incredulous tale of forbidden love, tragic loss, and reinvention. It is the classic immigrant story upended: an Italian widow’s transformative journey amid the most unlikely of circumstances.Inspired by Angelica’s example, the younger women share their “First World” problems and, in the process, set themselves free.But one heartbreaking secret remains untold…

Peck. Peck. Peck. It was unnerving to watch Bellastrega attempting to type on a computer keyboard. But if Angelica were to make any comment, the younger woman would pause and smile her enigmatic smile. Or she might rise and make her way to the kitchen where she would
brew one of her green teas. Nothing—at least nothing Angelica had observed in the past eight weeks—upset Bellastrega.

When the tall, striking blonde with the smallest of suitcases had knocked at her door, Angelica had known they would get along. And like everything else she had orchestrated in her life; Angelica had not been wrong. Within days of arriving, Bellastrega had reorganized the
household, implemented a healthy eating regimen, and given the octogenarian peace of mind.

When the tall, striking blonde with the smallest of suitcases had knocked at her door, Angelica had known they would get along. And like everything else she had orchestrated in her life; Angelica had not been wrong. Within days of arriving, Bellastrega had reorganized the household, implemented a healthy eating regimen, and given the octogenarian peace of mind.

At last week’s checkup, the specialist oncologist had frowned as flickers of uncertainty appeared in eyes that rarely showed emotion. Taking off his glasses, he had fumbled for words. The rogue cells had not magically disappeared, but there was a reprieve of sorts. Or at least, that’s what Angelica had gathered from the inarticulate sentences and the incredulous look on his face.

Time, that’s all Angelica needed. Time to tie up all the straggling bits that remained. But if Bellastrega didn’t finish typing the letter, the process could stall indefinitely.

Angelica breathed a sigh of relief as she rose and walked toward the desk. Two months ago, she could barely get out of bed and needed a cane or walker to move about. At first wary, Angelica had listened and followed Bellastrega’s advice. Espressos had given way to green teas, and the
white devils—flour, sugar, and bread—had been replaced with whole grain alternatives.

Affirmations and morning stretches improved Angelica’s mood and strengthened her legs. On milder days, the two women took short walks around the neighborhood. Had Bellastrega arrived six months earlier, she could have reversed the diagnosis and given Angelica years—possibly even a decade—of extra life.

Joanne Guidoccio will be awarding a $10 Amazon gift card to a randomly drawn winner via
Rafflecopter. Find out more here: