A Story of Mindful Relationships Between Nana, Lucy and Nature 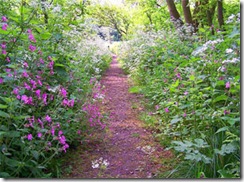 After a morning filled with an Easter Egg Hunt, moments of remembrance related to Easter’s deeper meanings, and a breakfast  fit for a prince and princess my husband and our grandson Kodiak went off for some time together. Our granddaughter Lucy and I went for a walk along the greenway that boarders our neighborhood and follows along beside a pretty little creek. We decided to walk toward the woods and then on into the trees as far as we could go. We did not expect the old narrow path to be so expanded, but it had been turned into a bike trail! My thought as we walked were, “This is Pooh Bear and Christopher Robin’s 100 acre woods … magical”!

Lucy ran before me running and squishing in mud puddles when possible, laughing as she went and at other times we held hands as we walked. There were moments of silence when I mentally spoke silent meditative words as I stepped along, honoring Earth and time spent with Lucy and nature. Wild flowers were in bloom and the woods was teaming with life. It all felt very special, and because Lucy was often quiet, I knew she was feeling the magic too.

We came across an inchworm dangling from a spider’s web so silken it was invisible to us. I had to move my hand through the air to find the thread and help Lucy get the worm to the ground. When the worm was safe, Lucy let him climb on a stick and then placed him to the right of the path on some leaves, and he crawled away. Lucy declared, “We saved his life.” We had done exactly that. We saved the little worms life.

There were various size toads all along the path, one so small we almost missed him. He was little more than an inch long and very cute, almost invisible in the fall leaves still covering the ground. Lucy discovered a tiny, leggy green tree frog, emerald green and cobalt blue flies, butterflies and moths.

At one point we walked under a natural arch of thick vines filled with little clusters of white fragrant blossoms. It was exquisite, like someone had planted it and cared for it! It looked like a wedding arch or an arch beginning the walkway up to a mountain cottage. Perhaps a house had once been there along the path? It was one of those unusual occurrences that set our minds to wondering how and why.

We found a tree along the edge of the creek that was equally spectacular to the flowering arch. The tree was 4 or 5 feet above the creek bed at the very edge of the bank. Half of the tree’s root system was in the wall of earth and the other half was exposed, winding around and searching for solid earth. The root system was like something out of a National Geographic magazine. We were both taken with the beauty of the root system, how large it was and how far to the left and right the roots ran, imagining the unseen roots running beneath the ground behind the tree.

Later we walked by an old tree with a huge tree trunk, too big for our arms to reach around … a magnificent tree who’d been a witness to many years of life. We talked about the age of the tree and all it had experienced and imagined how it must feel to be that old and that exceptionally strong and beautiful. Lucy made insightful comments about other old trees, very tall with thick old wrinkled bark and one in particular who was sharing life with an huge orange fungus.

On the way home, along the same path, we came across a bees nest with bees swarming out of the ground. We probably disturbed them on the way out, and they had not yet settled down as we came back to them. We watched the bees fly and land and buzz around for a minute or two, and I realized if we walked way to the right of the path, we could pass safely. Walking carefully so as not to disturb them, and quickly to avoid stings, we made it!

The water in the creek was moving pretty quickly and at places the sound of the water running over rocks almost sounded like a waterfall. We commented on the musical sound the water made as it traveled over the rocks. The water was moving quickly, and Lucy wanted to test out the current. She threw sticks into the water to see just how fast they would move with the water. They moved quickly, and she learned that if the stick was too big, it would sink. She threw a lot of sticks to watch them float down the creek.

We noticed an “island” in the stream, big enough to explore if there had been an easy way to get there. Someone had left a rusted hand saw stuck in the ground, which was an interesting find in the middle of the woods. However, because of the spring rains, we could see the divided path of the water. The main creek flowed to the right around the “island” and a smaller flow went to the left and rejoined maybe 20 feet ahead. It was an exciting adventure, there alone in the woods with nothing but the sounds of the forest.

We had a great time and we enjoyed being together. The trees and the stream made quite a spectacular and unique Easter Cathedral. We celebrated and enjoyed the little insects, birds, toads and frogs who live near the stream. We watched the squirrels run about, but we did not find the Easter bunny, no matter how hard we looked!

And we did look!